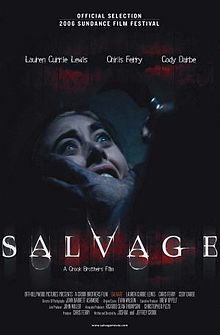 Salvage (released as Gruesome outside of the United States) is a 2006 horror movie by the Crook Brothers. Claire Parker finds herself reliving her brutal murder at the hands of Duke Desmond over and over again. As she tries to alter the circumstances, she learns more about Duke Desmond and what tie he has with her current fate.