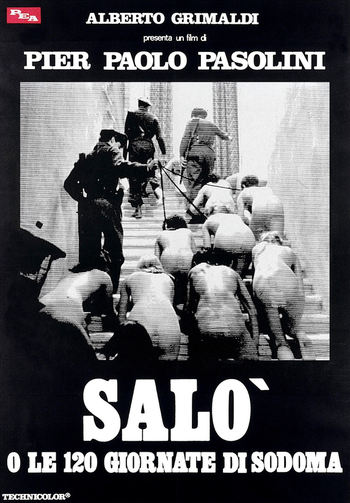 This week will suck.
"We fascists are the only true anarchists."
— The Duke
Advertisement:

Oft-regarded as the single most vile, most depraved, most despicable, most infamous and most controversial film of all time, Salò o le 120 giornate di Sodoma (Salò or the 120 Days of Sodom), also called simply Salò, is a 1975 Italian film of vague genre (straddling drama, horror, war, arthouse, Nazisploitation and emetic) written and directed by Pier Paolo Pasolini.

Based on the novel The 120 Days of Sodom, one of the most infamous works by the Marquis de Sade, which many critics attest is even nastier than the film, the film transplants the book's plot from the setting of 18th Century France to the Nazi puppet-state of the Italian Social Republic (also called Salò) in northern Italy in 1944 during World War II. Four fascist libertines known as the Duke, the Bishop, the Magistrate and the President, knowing that the allies will soon overcome Germany thereby dissolving their power, decide to have one last hoorah by having their private army abduct eighteen attractive teenagers (9 boys and 9 girls) from the local countryside and bring them to a deserted villa. From there, the fun begins with the hapless youths being subjected to 120 days of physical, mental and sexual torture.

The film is divided into four chapters called the Anteinferno, the Circle of Manias, the Circle of Shit and the Circle of Blood (with the Anteinferno being the aforementioned opening). Accompanying the four libertines are four middle-aged prostitutes conscripted from local brothels. At the start of each of the remaining three chapters, one of the prostitutes tells a story revolving around some form of sexual perversion (for example, at the start of the Circle of Shit the prostitute tells a story about coprophilia); the teenagers are then subjected to tortures based on that story. In the Circle of Manias they are subjected to anal rapes; forced to give handjobs; and a boy and girl are forced to marry but are then not allowed to consummate with the libertines coming over and raping them instead; and they are stripped, put in collars and leashes, and forced to act like dogs and eat bread embedded with nails. In the Circle of Shit, (in one of the most infamous scenes in the movie) the Duke defecates on the floor, a girl is stripped, and she is forced to crawl over and eat it with a spoon. Later, in an even more infamous scene the teens are fed their cooked previous week's excretions at a banquet. Amidst these acts those teens who break the libertines' rules have their names marked in a book, to be ultimately punished in a manner unknown to them...

In the final chapter, the Circle of Blood, the teens who had their names marked in the book are further marked with blue ribbons. The teens who have not broken the rules and have been seduced by the libertines to The Dark Side accompany them upstairs where they watch as, down below in the courtyard, the uncorrupted are brutally tortured and executed via having their nipples and genitals burned, their tongues cut out, their eyes gouged out; hanged, scalped, raped, flogged and branded. The closing shot is of two of the guards casually dancing a tango together...

To this day, debate rages amongst critics and film classification organizations as to whether the film is nothing more than exploitative, voyeuristic trash bordering on child porn or a legitimate piece of art and satire regarding fascism. Opinions vary. A melting pot of many aspects of Pier Paolo Pasolini's life; Italian Fascism, homosexuality, Roman Catholicism; unlike David Lynch he never made any secret of what the film's intention as a piece of art was; a Take That! to the entire edifice of fascism, an Orwellian warning of corruption in governments, a demonstration of both mankind's inherent evil and selfishness (one scene has a series of rulebreaking victims telling on other rulebreakers when caught to try and avoid punishment; i.e... two girls engaged in lesbianism tell on a boy sneaking off to have sex with the black maid) and inherent complacency (only on two far-removed occasions do any of the victims make any attempt to escape; for the most part they just accept their treatment). There are also specific meanings attributed to more specific scenes; the coprophilic scenes for example were said by Pasolini to be a Take That! to the fast-food industry. More than a few people regard the film as Pasolini's Take That to the entire human race.

Salò, or the 120 Days of Sodom provides examples of: