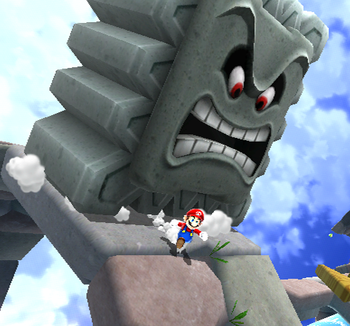 Mario finds himself between a rock and a hard place.
"When [you are] walking along a road at night, suddenly a wall appears infront of you, and you cannot go anywhere. This is called nurikabe and it is feared."
— The Book of Yokai: Mysterious Creatures of Japanese Folklore
Advertisement:

A Youkai from Japanese folklore that takes the form of an animate section of wall. It has the power to turn invisible, and likes to use this power to impede travelers. Interesting enough, its common depiction of being an animated wall is somewhat of a modern representation. Originally during the Edo period, one of its early depictions was that of a three-eyed grotesque vaguely dog-like creature. Over time, its depiction changed to a literal wall with limbs and very vague features.