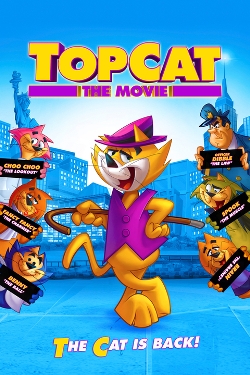 Don Gato y su Pandilla (known in English as simply Top Cat: The Movie) is a 2011 movie made in Mexico, based on the famous cartoon of the same name.

Skipping to the intro of what is thought to be for TC and the gang, another ordinary day (whatever that meant), Officer Dibble is excited to be promoted as the new Chief of Police after knowing that the old Chief will be retiring. But in an unexpected turn, his son-in-law, Lou Strickland, would instead be taking his place despite having no experience. He replaced the staff with robots which he thought to be more competent, with everything else relying solely on technology, in the belief that they couldn't make mistakes. With absurd changes within the city's law and the people of New York under a tyrannical rule, Top Cat, his gang and Officer Dibble plan to stop him in his tracks.

A prequel was released in Mexican theaters on October 30, 2015 called Don Gato: El Inicio de la Pandilla (known as Top Cat Begins in English) which takes place before the film and series where Top Cat meets Benny and the rest of the gang.