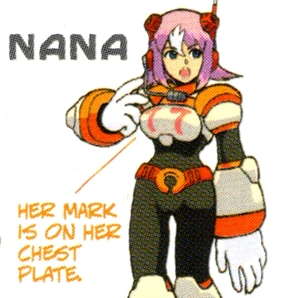 When counting in Japanese, shichi is the typical word used for the number 7. However, in normal conversation, you will almost never encounter a Japanese person say shichi in any other context. The problem lies in the fact that Japanese people don't actually like the word shichi, as it sounds too similar to shi, the counting word for 4, which also sounds like the word for death. Being a superstitious people, the Japanese really, really hate invoking death every time they count.

Nana is one pronunciation for the number 7 in the Japanese language, and is the one more commonly used. In anime and manga, it's sometimes used as a feminine name with possible double meaning. If a character appears with the name Nana, expect it to be a Meaningful Name.

Keep in mind, however, that if you want to describe seven things, seven objects, or seven people then you'll be using different words entirely. Yeah... Japanese is hard.