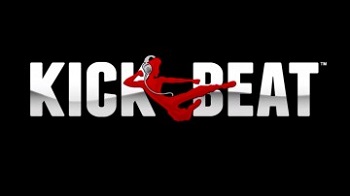 KickBeat is a martial arts-themed Rhythm Game released by Zen Studios for the PlayStation 3, PlayStation 4, PlayStation Vita, Steam, and Wii U. It follows the story of a trainee martial artist who enrolled at an order of monks tasked with guarding a giant sphere that contains all the music ever thought of in the past and future. When a group of mercenaries suddenly raids the monastery where the sphere is kept, it's up to said trainee to travel the world in search of the mysterious Earth Organization, all the while rhythmically beating down every mook that comes his way.