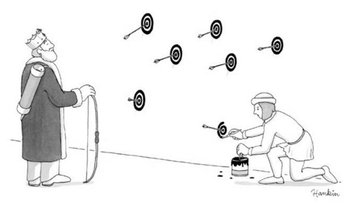 It's easy to say you hit the bullseye if you draw it after you fire the arrows.
Once again, TheGamerFromMars proves he is illuminati.
The first three words he says in this video are 'Outside of Mario
Outside of Mario' has three O's
A polo mint only has one O
A polo mint has no physical centre of mass.
Midnight Mass is the mass held on Midnight at Christmas Eve.
And what day is it today? That's right - Christmas Eve.
But there's more, EVE and Adam were the supposed first humans on the Earth.
Earth is planet. It is also the THIRD planet in our solar system, note there are three points in the illuminati Triangle.
'Illuminati Triangle' has four I's.
The fourth planet in our solar system is Mars.
TheGamerFromMARS - coincidence? I think not.
TheGamerFromMars is illuminati confirmed.
— OcarinaSenpai's

A way of fiddling statistics or other forms of data analysis, this occurs where data is gathered first and then an after-the-fact hypothesis is produced to explain the conclusion drawn from it: in other words, the same data is used to generate both the hypothesis and the conclusion. The prototypical example is of a person shooting a gun at a wall, then painting a target around the bullet-hole, and claiming to have scored a bullseye because that is clearly where he was trying to hit. Obviously, hitting a bullseye is significant if you decided where the bullseye was before you fired, but not so much if you claim you knew where it was after the fact.

All such "I Meant to Do That" justifications are examples of this fallacy, but it also applies to cases where a set of data is analysed with no real methodology, simply in an attempt to find something by any means. When the thing is found, the convoluted method is said to obviously be the intended method of parsing the data. This is a common fallacy in claims of messages in fiction: the writer will find a pattern to the text, then declare this pattern was obviously the author's intention, without any proof this is actually the case.

Karl Popper summed up this fallacy as applied to science with "A theory that explains everything, explains nothing". Basically, if any possible outcome could be interpreted as supporting the theory then it is useless. Which is pretty much the same thing as the concept of falsifiability.