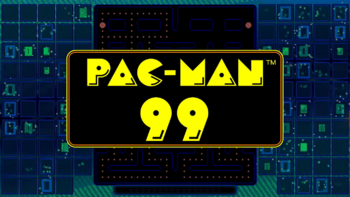 PAC-MAN 99 is a Battle Royale version of Pac-Man developed by Arika and published by Bandai Namco Entertainment, released on the Nintendo Switch Online service on April 7, 2021. It is the third Arika-developed Battle Royale based on a classic video game, following the highly-successful Tetris 99 and Super Mario Bros. 35.

In this variation of the classic game, players compete with 98 other players to become the last man standing, the "PAC-ONE". To win, players must survive an endless maze of Pac-Man while chomping dots and avoiding the deadly touch of the four ghosts. Eating a Power Pellet and consuming a blue ghost allows the player to attack other players in the form of Jammer Pac-Man that impede players and eventually increase in lethality over the course of a match. In addition, players can increase their attack power by activating the "sleeping ghosts" to summon ghost trains a la Pac-Man Championship Edition and generate more ghosts to chomp at once, and swap between four different kinds of Power-Ups to gain an edge over the competition.

In addition to the free base game, there is an all-in-one Downloadable Content package called the "Deluxe Pack" that enables Private Matches and several offline features, including a COM Battle mode, a Score Attack, and Blind Time Attack mode, as well as adding a catalogue of custom themes based off of various Pac-Man games and titles from Namco's exhaustive retro games library. Themes can also be bought individually, and the additional modes can be purchased as their own bundle.