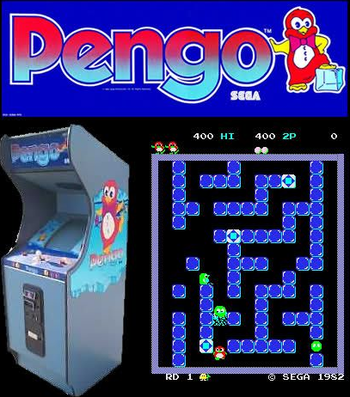 In this game, you control Pengo, a red penguin stuck in an overhead maze made of ice blocks, where Pengo must fight the blob-like things called Sno-Bees. The objective is to have Pengo clear a series of rounds by eliminating all Sno-Bees, either with kicking ice blocks onto them or having them stunned to be vulnerable on contact. It's mainly about scoring highest points possible by pulling off dangerous tricks, and if you bring together the three diamonds dispersed in the maze, it will also grant you lots of bonuses. All while doing this, the game plays Gershon Kingsley's 1969 instrumental "Popcorn," rendered in (very catchy) 8-bit music.

Pengo was one of Sega's greatest hits at the time, and inspired tons of ports and clones for many systems. However, it's not well-known that Pengo had a few sequels, albeit none leaving Japan. The first sequel, Ninkuu Gaiden: Hiroyuki Daikatsugeki (November 1995) for Game Gear, was strangely released as a tie-in game to the manga/anime series Ninku, starring that manga's Hiroyuki instead of Pengo. It takes many elements of Pengo's gameplay with its own additions. The next one, Pepenga Pengo (December 1995), was released for the Genesis and completely re-structured to look like a Bomberman rip-off.

The third (and currently last) sequel was simply named Pengo! (2010), which returns to the arcades and focuses on the competitive multiplayer. Here, up to eight people must play against each other for scoring under time limit, with killing each other giving one the highest score. It was later ported and included on Xbox 360 compilation Ge-Sen Love: Plus Pengo! in 2012.