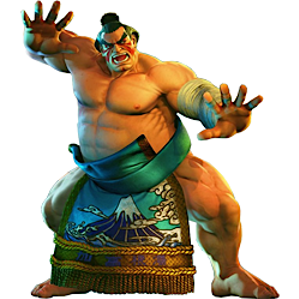 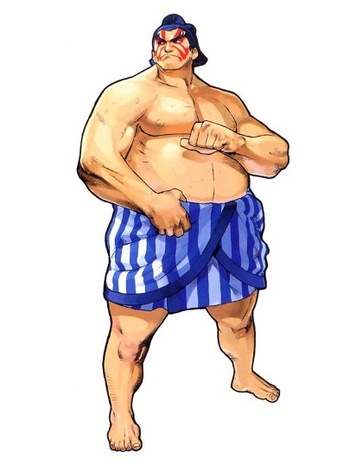 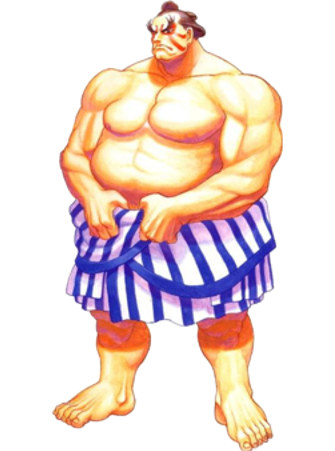 It's natural for a sumo wrestler to become the world's strongest!
Origin: Japan

Honda is a power-oriented fighter whose lackluster movement speed is belied by the immense coverage of both his normal and special moves. His normal attacks have surprisingly long reach, with some able to hit at unexpected angles. His Sumo Headbutt is extremely fast, allowing him to torpedo across the screen and ram into his opponents. His Sumo Smash, introduced in Hyper Fighting, grants aerial coverage and slams down onto anyone below, providing a deceptive overhead attack that forces the opponent to guess where to block due to its ability to cross-up ambiguously. His Signature Move is the Hundred Hand Slap, an attack performed by mashing the punch buttons as fast as possible. Its usage and mobility have gone through many different iterations, but newer titles make it advance Honda towards his opponent and set the opponent up for combos should it hit. And lastly, being a sumo wrestler, he has a devastating command grab called the Oicho Nage in order to open up opponents who are too complacent in blocking attacks such as his Hundred Hand Slap. All in all, Honda is a well-rounded powerhouse who can seamlessly transition from being patient and defensive one moment into an overwhelming torrent the next.
Blanka 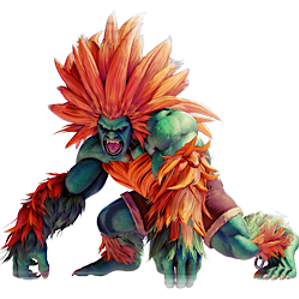 The Wild Warrior of the Amazon
Street Fighter Alpha 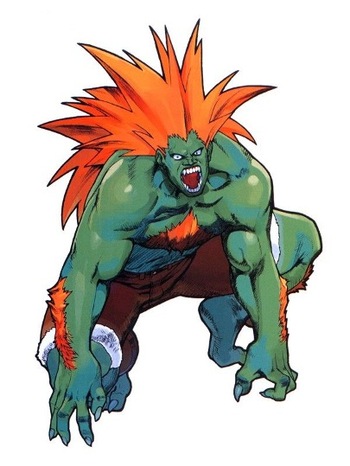 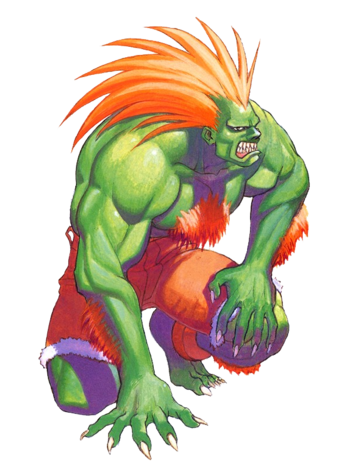 He returns in V, looking even wilder than before with much longer and thicker hair. Additionally, he's also grown green hair around his arms and legs, making him almost entirely covered in fur. Despite this, he's now living peacefully with his mother and has integrated himself into society. He was also approached by a suspicious salesman who promised Blanka fame, and made a line of "Blanka-Chan" dolls. Unfortunately, they're not selling, and Blanka is now faced with a surplus of Blanka-Chan dolls he needs to sell.

Blanka's greatest strength is his blistering mobility, having special moves that rocket him all over the screen to attack from different angles. His signature Rolling Attack requires a charge input, but at its highest strength, he can attack from across the entire stage. He can also play keep away with Electric Thunder, enveloping himself in electricity to ward off offense, and shut down his opponent's long ranged attacks with his various command leaps and evasive duck.
Guile 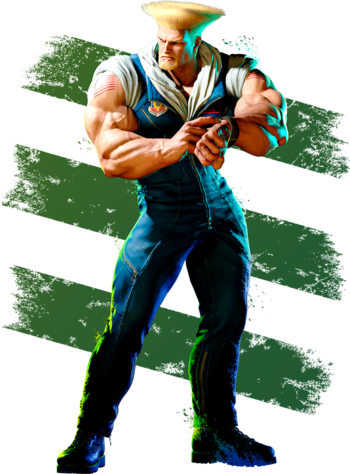 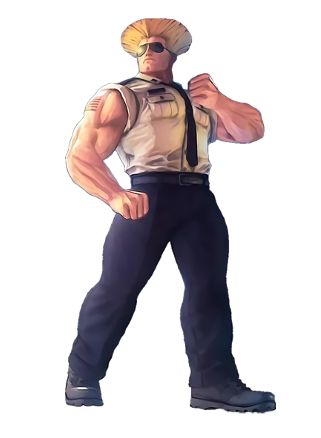 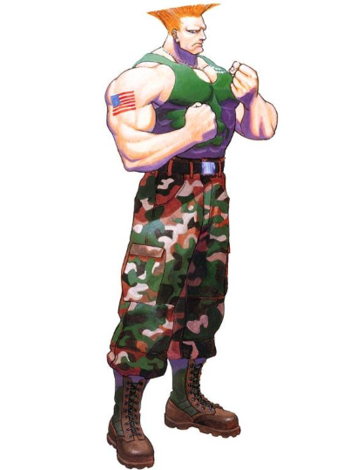 Guile is the archetypical "charge" character, a highly defensive fighter who can deny his opponents' approach with strong, far-reaching basic hits and his aforementioned Charge Input Specials. His two special moves have stayed the exact same since his debut, the iconic Sonic Boom and Flash Kick; one being a projectile to space people out on the ground, and the other a powerful Anti-Air to keep anyone from jumping in on him.
Advertisement:
Chun-Li 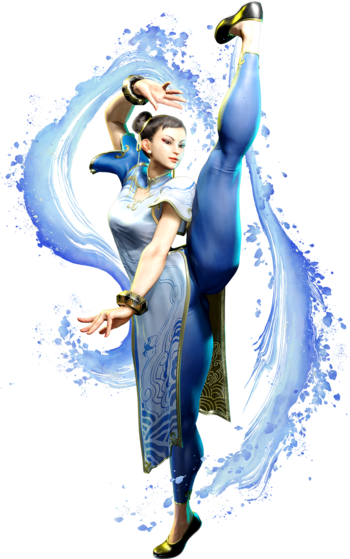 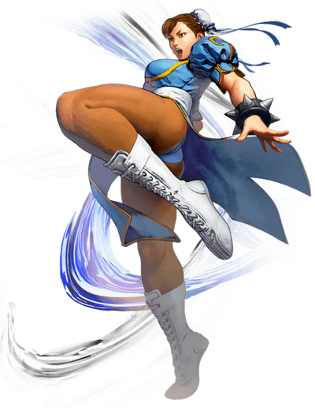 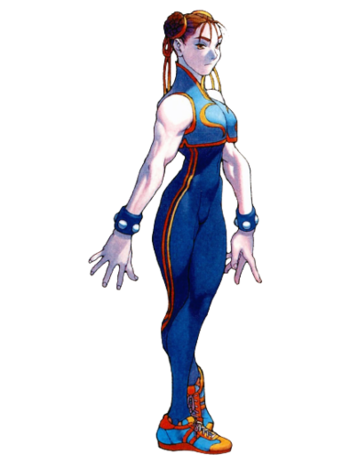 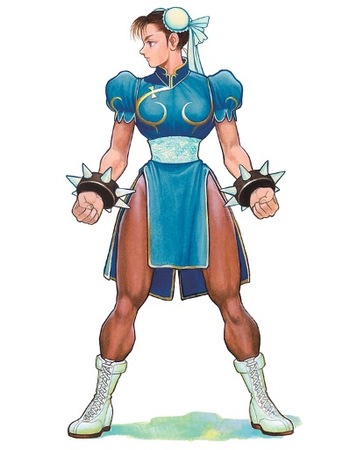 I'm the strongest woman in the world!
Origin: China

While Chun-Li was not the first playable female fighting game characternote That would be Yuki from the 1985 fighter Onna Sansirou - Typhoon Gal, nor the first female fighter by any meansnote That honor goes to Star and Fan from Yie Ar Kung Fu, released earlier in 1985, she is definitely the first prominent and well-known one, earning her the honorary title "First Lady of Fighting Games". The trend of female fighters being quicker and lighter and liking kicks can be traced directly to Chun-Li's huge and powerful legs.

Chun-Li's gameplay has undergone many overhauls throughout the series' history, though generally she is portrayed as a well-rounded but technical character who specializes in restricting the opponent's movement with her arsenal of pokes and space control tools. She boasts a plethora of unique command normals that grant her extra mobility and force opponents into making quick decisions. Her Lightning Kick is similar in function to E. Honda's Hundred Hand Slap, serving as a combo tool generally and sometimes a means of locking the opponent down depending on the game. Her Spinning Bird Kick, initially a mobility tool in earlier games, eventually became her primary combo ender which allows her to steadily push opponents into the corner. Hyper Fighting granted her third and final signature move in the Kikoken, a multi-purpose projectile that allows her to cover space, combo opponents, and even score a quick knockdown or juggle.
Zangief 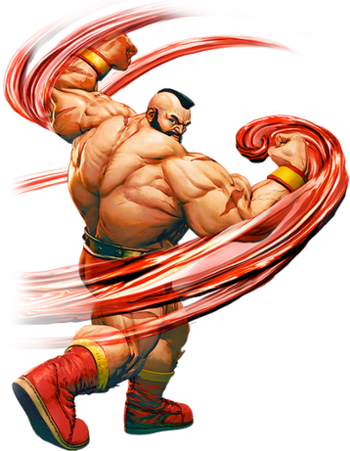 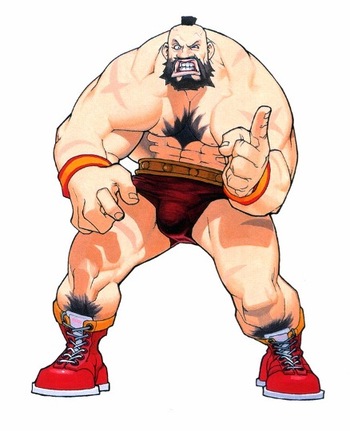 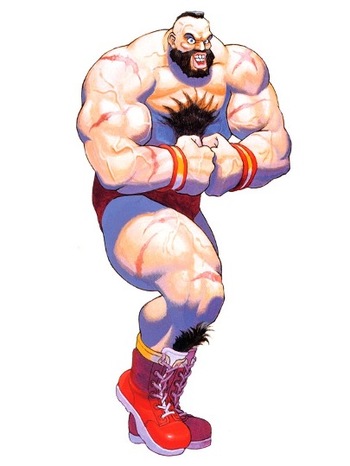 I am the Red Cyclone!
Origin: Russia (USSR at debut)

Zangief is the fighting game grappler, a big-bodied, slow, and close-ranged powerhouse who works his way in to decimate his opponents with devastating command grabs. His Signature Move, the Screw Piledriver, centers his moveset, with his other moves being used to get close to his opponents, usually with armor (Flying Powerbomb) or being immune to projectiles (Double Lariat, Banishing Flat).
Dhalsim 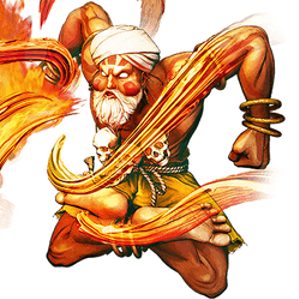 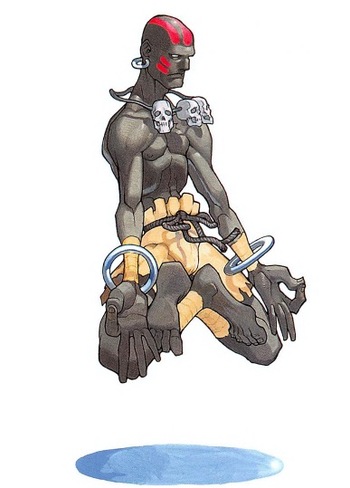 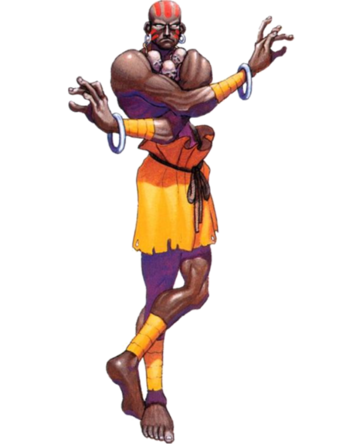 Allow me to demonstrate the miracle of Yoga.
Origin: India 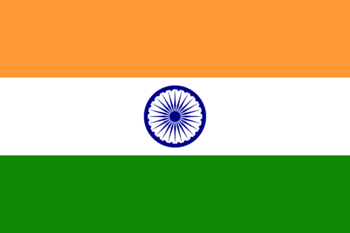 , whom he loves very much. By the way, the skulls he wears are those of children who died due to a famine in his village, not the skulls of his enemies. In IV S.I.N builds a dam far upstream blocking a river that provides water (and trade, fishing, etc.) to his village, so he enters the tournament once again to reclaim it. He returns again in Street Fighter V, now sporting a new look, with a beard and a pagri. His story prologue shows that he has started a Yoga school and is training an up-and-coming police officer named Mahesh, who wishes to use Yoga to protect others.

Dhalsim is the franchise's archetypal ranged, tricky fighter. His long, stretchy limbs allow him to control nearly the entirety of the screen, safely poking and prodding at impatient opponents. This, however, does not necessarily mean he is helpless in close-quarters situations. Like Chun-Li and others, he has several unique command normals that allow him to fight up-close. His mobility is normally very slow with very floaty jumps, but through the use of his Yoga Drill command normals he can alter his jump arc at will while going on the offensive. His Yoga Fire is a small but slow-moving projectile that can both bait out reactions from opponents as well as allow Dhalsim to approach. His Yoga Flame and Yoga Blast serve as both combo enders and anti-airs. Lastly there is his Yoga Teleport. Introduced in Hyper Fighting as the result of an Ascended Glitch, this move is both one of Dhalsim's greatest defensive and offensive assets as it allows him to both escape pressure from his opponent while also quickly moving him in close to surprise and pressure the opponent himself.
Balrog 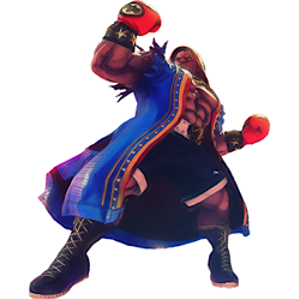 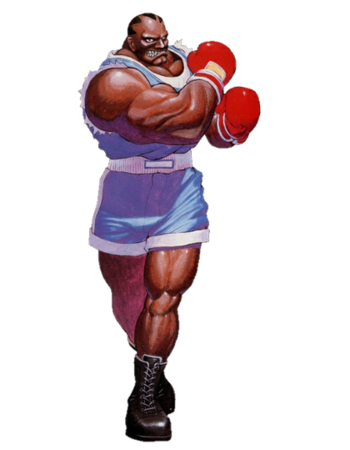 Damn! My fists have your blood on them!
Origin: USA

Balrog returns in Street Fighter V as a DLC character. Here, he's still working for Shadaloo, but now has his own faithful right-hand man, Ed, a bandaged child meant to be a replacement body for Bison, who Balrog saved from the crumbling S.I.N. building in IV. Together they do whatever they can to get more cash. This includes selling out Shadaloo to the Illuminati by giving out information on Operation C.H.A.I.N.S.

Being a boxer, Balrog's gameplay style allows him to swiftly close the distance between himself and his opponents, all the while weaving in and out of his opponent's effective ranges. Though his air mobility and options are not strong, his ground mobility is excellent. Similar to Blanka, Balrog's main attacks, the Dash Punch series, are all variants of the same move, able to cover many angles and serve different purposes while advancing Balrog towards his opponent. He's also by no means helpless against projectiles either thanks to his Turn-Around Punch, or TAP for short. By holding three (sometimes two, depending on the game) attack buttons for a certain amount of time and then releasing it, Balrog will declare a number out loud indicating the level of power the move has, turn around for a brief moment to avoid projectiles, then lunge towardsx the opponent. Higher level Turn Punches are particularly devastating, dealing unprecedented damage and sometimes gaining additional properties. He also has an invincible reversal attack in the form of the Buffalo Headbutt.
Vega 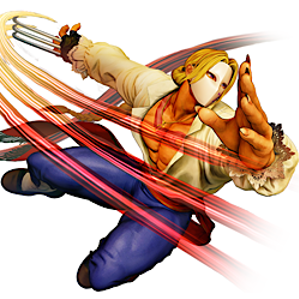 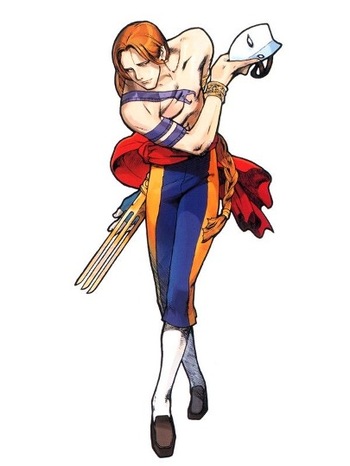 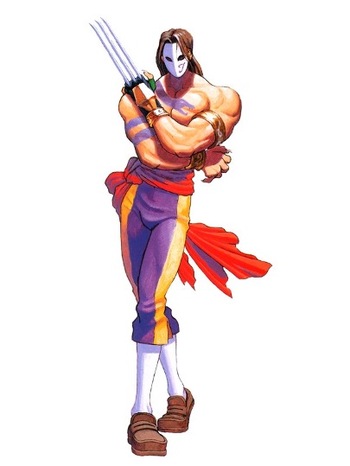 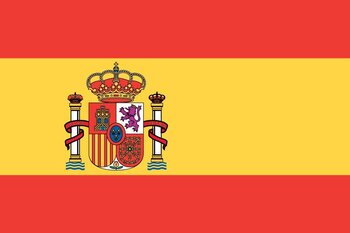 Vega is extremely narcissistic; he believes that he is the most beautiful person in the world, and all others are inferior to him. To keep that delusion intact, Vega wears a mask while in battle to protect his face. (Too bad the mask is easily broken.)

He returns once again in V, now wearing the frilled shirt depicted in his first alternate costume in IV and sporting the blonde hair he had in Alpha as well as the animated adaptations. Although outranked by F.A.N.G, Vega continues to act as the top enforcer of Bison's will, dealing with Shadaloo's enemies so that they don't interfere with their grandest scheme yet: Operation C.H.A.I.N.S.

Vega is the Fragile Speedster of the series. His gameplay revolves all around his amazing mobility options in conjunction with the long reach granted by his claw. His walk speed is usually the fastest in any given installment he appears in, and his jumps are both fast and give him a good angle to mix up opponents from. He also boasts several other mobility tools such as his special Backflip, granting him immunity to physical attacks and projectiles for their duration. His claw grants him very long reach but can be knocked off if he takes too much damage, sometimes permanently depending on the game, giving those who play Vega an extra incentive to maintain as much of a lead as they can. In later games, even his mask can be knocked off, but unlike with losing his claw this actually turns him into a Glass Cannon by buffing his damage at the cost of taking more damage. Through the use of moves that whittle away at his oppoonent's patience such as the Rolling Crystal Flash and Scarlet Terror, to his arsenal of high-flying acrobatic attacks such as the Flying Barcelona Attack, the Sky High Claw, and the Izuna Drop, Vega can prove to be a very frustrating character to fight gainst.
Advertisement:
M. Bison
See his page for more info.