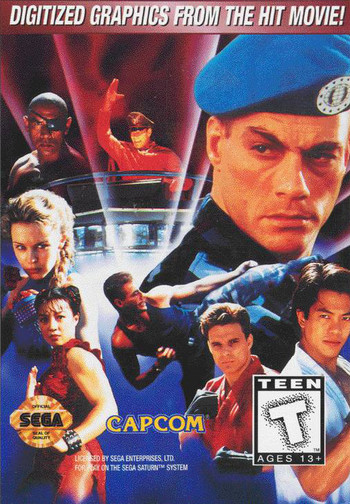 Street Fighter: The Movie is the title of two different games in the Street Fighter series, both based on the 1994 film adaptation Street Fighter. The arcade version was developed by Incredible Technologies, the same staff behind Time Killers, while the PlayStation/Sega Saturn versions, although published by Acclaim outside of Japan, were developed by Capcom themselves. Such recursive adaptations are not unheard of, but they are rare for video games. Despite having the same title, the home version developed by Capcom is not a port of the arcade version. Though they both used the same digitized pictures as sprites, in the manner of Mortal Kombat, any similarities between the two end there. Even the digitization method used to convert the footage into game graphics were different for both games. In fact, the home version was actually released in Japan under a different title: Street Fighter: Real Battle on Film.

The arcade version of the game is noted for its numerous alterations to the standard Street Fighter formula, such as the inclusion of Mortal Kombat-style "tapping" commands, counter-attacks for throws, alternate Super Combos that featured "hold and release" commands, excessive juggles (in comparison to Super Street Fighter II Turbo, the last traditional Street Fighter at the time), fireball-reflecting attacks, numerous secret codes (including fake ones), among other weird changes in an attempt to pander to the Mortal Kombat crowd. This version took the character roster from Super Street Fighter II Turbo (including Akuma), but ditched Blanka, Dhalsim, Dee Jay, T. Hawk and Fei Long in favor of Captain Sawada, an original character who was featured in the movie, and Blade, a Shadaloo elite trooper who appears in the game along with three palette swapped hidden versions a la Sub-Zero/Scorpion. The lead designer Alan Noon wrote a tell-all account on his involvement in the game's development, which he posted here

The home version, in contrast, plays more like a traditional Street Fighter game. More precisely, it plays like a slower-paced version of Super Street Fighter II Turbo but with digitized graphics. While the digitized actors are the same, the characters have all been dubbed by Japanese voice actors, averting the mispronounced move names in the arcade version. One overlooked aspect of the game is the fact it introduced the concept of EX Specials to the franchise (though named differently in this installment): powered-up versions of special moves that are not quite as powerful as Super Combos, but easier to perform. Capcom later reintroduced the EX Specials to the franchise in Street Fighter III 2nd Impact. The character roster brings back Blanka and Dee Jay, while ditching Blade and his palette swaps. Akuma returns to his common position as a hidden character and Sawada is revamped as a joke character, complete with a Human Kamikaze Super Combo.

In 2016, Sawada and the four Bison Troopers were

which officially make them canon as of Street Fighter V.