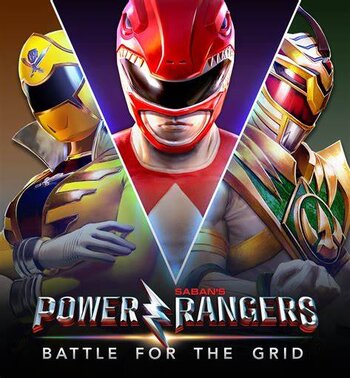 Power Rangers: Battle for the Grid is a Power Rangers Fighting Game developed by nWaynote the same team behind Power Rangers: Legacy Wars using the Unity engine. It was released on PlayStation 4 on April 2 2019 in the US and March 28 2019 in Europe, for Xbox One, and Nintendo Switch on March 26 2019 and for PC via Steam on September 24, 2019. On May 25, 2021, a "Super Edition" of the game was released, containing all of the DLC Characters and Skins from the first three packs, along with the original game's content. Here's the game's site

It has significantly different gameplay from Power Rangers: Legacy Wars, appearing more like a traditional fighting game (albeit with more accessible controls). Fights are conducted as 3-vs.-3 Tag Team battles, akin to the Marvel vs. Capcom later entries. Its roster pulls characters from throughout the franchise's history, including the Boom! Studios comic book.

Also worth noting is that Battle for the Grid is the second Power Rangers game to receive a Teen rating from the ESRB. The first was Power Rangers: Super Samurai for Xbox 360.