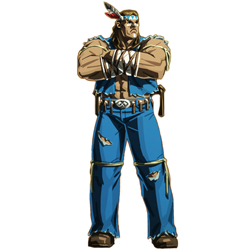 "Fighting with conviction leads to victory."

Fighting style: Thunderfoot martial arts
Voiced by: note Shōzō Iizuka (Street Fighter II: The Animated Movie; Japanese), Steve Blum (Street Fighter II: The Animated Movie; English), Paul Dobson (American cartoon), Tohru Nara (Super Street Fighter IV; Japanese), David Vincent (Super Street Fighter IV; English)
Portrayed by: note Gregg Rainwater (Live Action Movie)
Full name Thunder Hawk. A Native American warrior from Mexico whose ancestral homeland was taken over by Shadaloo, following the murder of his father Arroyo at the hands of Bison. In Alpha 3 T. Hawk looks for the members of his tribe to return them to their homeland. He finds Juli(a), a member of his tribe, but does not remember him. They fight, but it is unknown if she returned with him afterwards. In Street Fighter II he enters Bison's tournament to get revenge on him for taking his homeland. When Bison is defeated, T. Hawk regains his people's homeland and promises to make it what it once was. He shows up in Super Street Fighter IV, still searching for Julia.
Fei Long 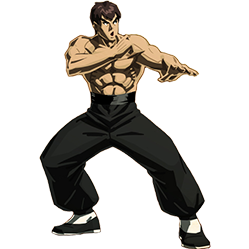 "You have trained to be a great loser. Now you must learn to fight." 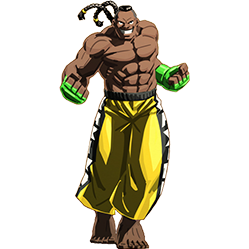 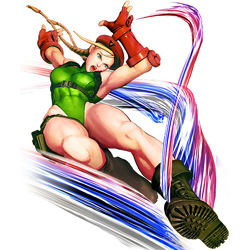 "For those I wish to protect, I will fight you."

In Street Fighter IV, she is sent to investigate S.I.N.'s connection to Shadaloo and to acquire data on the BLECE Project. She's also there for a personal reason: Juri Han, a member of S.I.N, gave a brutal beatdown to the Shadaloo Dolls, whom she considers her younger sisters.

Cammy returns in Street Fighter V still in her Delta Red incarnation but sporting an updated look, reminiscent of her appearance in the spin-off Cannon Spike. During the interim between IV and V, she has continued investigating Shadaloo while also tending to her fellow Doll Juni, who is now amnesic and getting accustomed once more to a normal life. 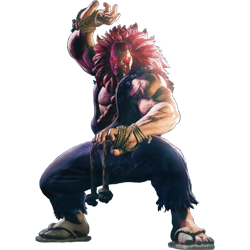 Master of the Fist

"I am Akuma, and my fists know no equal!"

Was part of the second wave of DLC characters for Street Fighter V. His signature ten (heaven) sigil is gone, having been replaced with the sigil that appears in Capcom vs. SNK 2 in his Shin Akuma form: kami-hito (demigod). In addition, his iconic flame-esque hairstyle has been changed to resemble a lion's mane. 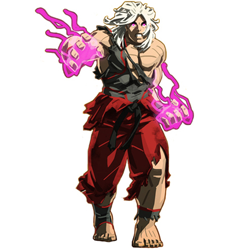 Fighting style: Ansatsuken
Voiced by: note Atsushi "Monster" Maezuka (SNK vs. Capcom: SVC Chaos), Yuji Kishi (Ultra Street Fighter II, HD voice)
A "What If?" version of Ken originally created for the crossover game SNK vs. Capcom: SVC Chaos and based on the events of Street Fighter II: The Animated Movie. Having been captured and brainwashed by M. Bison by implanting his Psycho Power within him, Ken is now a pure killing machine whose rivalry with Ryu has been corrupted into desiring to kill him and surpass him.