Character subpage for Dante, the primary character from Devil May Cry.

"This party's getting crazy!"
Click here to see his DMC 4 self 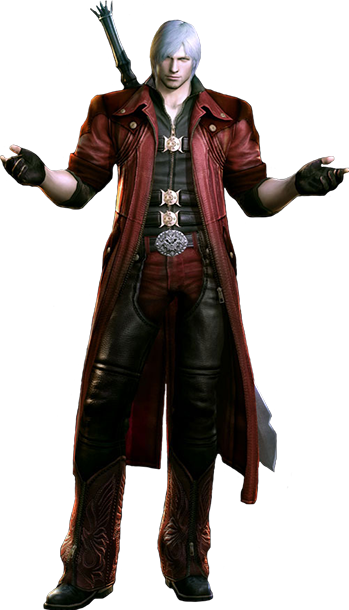 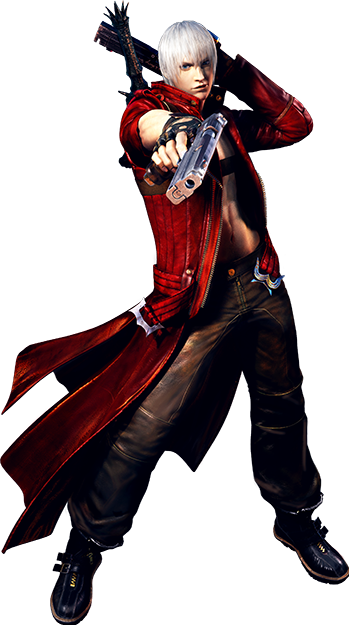 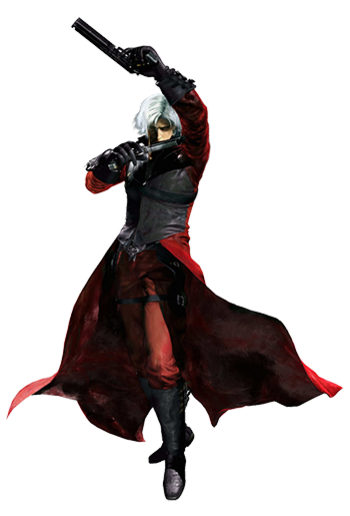 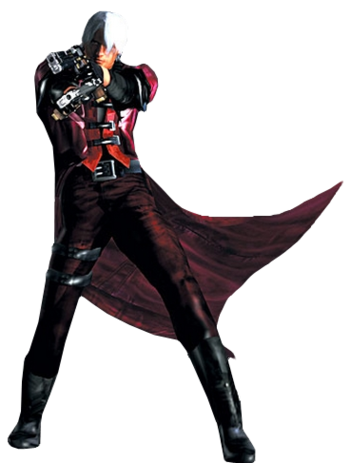 The Anti-Hero Demon Slaying Half-Human Hybrid son of an Ascended Demon named Sparda and a human named Eva. After losing his mother to demons as a child, Dante grows up to become a demon-hunting mercenary who runs his own devil-hunting business named Devil May Cry.

Being half-demon, Dante has Super Strength, Nigh-Invulnerability and a Healing Factor, along with the ability to transform into a demonic Super Mode called Devil Trigger. His weapons of choice are two custom handguns known as Ebony & Ivory, and a memento broadsword of his father's named Rebellion.

While often cocky, deep down he is a compassionate man devoted to fighting for the good of humanity and helping his friends. Still, he does like getting paid for it.

Dante's fighting style (popularized by the third game) revolves around his... well, Styles, which are toggle-able movesets that change what the Circle/B button does depending on what weapon he has equipped and the situation at hand. Dante has a total of four styles, two offensive and two defensive. Swordmaster adds new Devil Arm abilities that improve his damage with them significantly, and Gunslinger makes his firearms much more versatile and adaptive. Trickster gives him a dash move, an air dash, and a teleport, and Royalguard allows him to block, as well as allowing him to absorb the blocked damage and redirect it back at his enemies. Devil May Cry 3 also grants him Quicksilver and Doppelganger. In 4, Dante can switch between these styles at will, and judicious usage of his abilities turns him into a Master of All, but Some Dexterity Required.

His Devil Trigger gives him a Healing Factor, increased defense, and enhanced strength. Some of his attacks also come off differently while in this state, usually giving him higher damage potential. In 5, Dante gains an advanced Devil Trigger form called Sin Devil Trigger, which completely changes his moveset and massively buffs his damage. To access this form, Dante must "sacrifice" bars of his DT gauge to fill the SDT gauge.

He also now has his own Self-Demonstrating page.