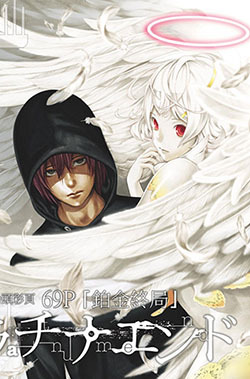 Freshly graduated from middle school, Mirai Kakehashi has only one wish: throwing himself off a roof to end his miserable life, having been treated as a slave for years by his foster family after his parents died in an accident. And jumping off a roof he does… but his guardian angel, a young-looking girl called Nasse, doesn't want to let him die and saves him just before he hits the ground. Nasse has one goal: making Kakehashi happy, no matter what.

After which she gives him two powers: the wings of "freedom" (the ability to fly at light-speed) and the arrow of "love" (the ability to make anyone love him for 33 days). Little does he know at first, he is only one of 13 humans, each chosen by an angel in a competition to choose the new God. Kakehashi soon realizes that these angel powers can be scary, and that not everyone is as scrupulous as he is in their use.

Platinum End is the latest collaboration of Obata Takeshi and Ohba Tsugumi, the writer/artist duo behind Death Note and Bakuman。, which was published in Monthly Jump Square from November 2015 to January 2021. An anime adaptation by Signal.MD with Studio Pierrot as part of the production committee, which will run for 24 episodes, began airing in October 2021.