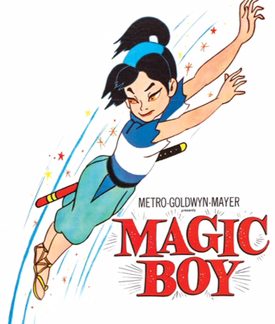 Shōnen Sarutobi Sasuke ("Young Sarutobi Sasuke") was released by Toei Animation in 1959 as their second feature-length animated movie (after The Tale of the White Serpent. In June 1961, it became the second anime film to be released in the United States (as Magic Boy), with Panda and the Magic Serpent [Hakujaden] released one month later in July 1961. MGM handled the US release for Toei, which means it occasionally appears on Turner Classic Movies.

The story centers on the boyhood adventures of Sarutobi Sasuke as he helps Sanada Yukimura protect the land from the reemergence of the evil witch Yakusha.

Not to be confused with Manga Sarutobi Sasuke, a 24-episode anime series from 1979-80 (released in the US as Ninja, The Wonder Boy).