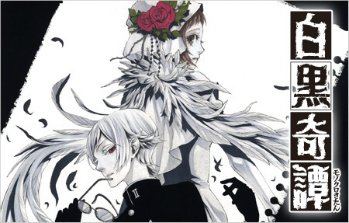 "First comes the prelude... Come... Paint my stage a little brighter color with that blood... My dear children."

Shirokuro Kitan is a 2009 shounen fantasy and mystery manga series by Rinka Kusunoki.

Ririko Benibana moves to the town of Kaminoshiro, which her father Magatsu Benibana investigated prior to his untimely death. Around this time, she received a letter from her father from one of her father's colleagues that contained a single card that's black on one side and checkered black-and-white on the other side. Ririko doesn't know what the card is, but she feels that her father's death may not have been accidental after all.

Ririko notices that something is wrong when her new friends Maya Sonomachi and Murasaki Miba avoid talking about the black clock tower found in town whenever she tries to bring it up, and things don't look so good when she learns what her card is when she gets attacked by one herself. Her indifferent and haughty classmate Shirou Otori appears and uses a card of his own—called a "Malice"—to defeat it. As Ririko attempts to learn about Malice, the residents of the clock tower called "Toy Soldiers," and how this might relate to her father's death, she encounters a student who has secrets of his own: Kurokichi Kagenui.

Has been Cut Short by its publishing magazine, GFantasy.