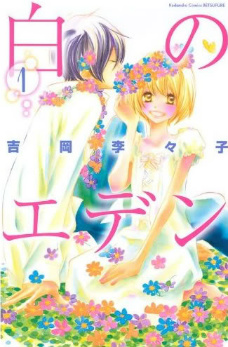 Shiro no Eden is a 2010 Shōjo manga series by Ririko Yoshioka.

Third year middle school student Mashiro Serikawa is pressured by her stepfather and mother to do better in cram school, is hated by her stepbrother Shuuto, and is isolated from her classmates because of her constant studying and her status as the adoptive daughter of the Houou Seminar Cram School's principal. She feels like she doesn't belong and constantly tells herself to be a "good child" or she will be hated.

When Mashiro arrives at the train station from another evening of cram school, she witnesses an argument between a man and a woman that ends with the woman running into a train and leaving, the man being left behind, and papers scattered on the ground. Mashiro helps pick up the papers and returns them to the man—carefree and mysterious Ai Takano—who then takes Mashiro to see the cherry blossoms in gratitude for her help. There, Mashiro admits her problems to Ai, and he comforts her and gives her a sweet candy that can "grant any wish," which reminds Mashiro of a boy who said the same exact thing to her as a child. Mashiro asks if she can meet Ai again, and he gives her an address if she wants to see him. The address in question turns out to be the Tori no Ko Cram School, and Ai is one of the teachers there. Ai's younger brother Satsuki Takano and Kayo Misawa, who are also fellow classmates of Mashiro's, attend the cram school too.

Through Ai's guidance and seeing how friendly and fun the Tori ni Ko Cram School and its students are, Mashiro decides to join the cram school in her resolve to change herself and to reach out to others, and in doing so, she gradually finds herself becoming closer to Ai and falls in love with him. However, in spite of Ai's friendly demeanor, it's soon hinted that he is not-so-friendly as one would realize and has problems of his own that are masked behind his smile.