Manga / Shinigami-sama to 4-nin no Kanojo 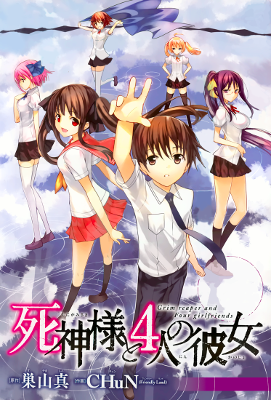 Minaguchi Kaoru is nothing special. Bad at sports, poor grades, not in any clubs, and certainly not popular. He has no friends and isn't even interested in any of the girls he knows. He's also bullied due to the fact that he loves shoujo manga. Unlike the harem daydreams of his peers, he dreams of finding his true love. Unfortunately, a shinigami comes to kill him, simply because he's a failure. But when he gasps out his intention of becoming a success with his final breaths, she takes it back! As long as he follows through on his intentions, he won't be harvested.

To convince the shinigami that his plans are genuine, he declares that he will confess to the girl he likes, the very next day. Expecting failure with confessing to random girls in his school, he sends out love letters to four different girls. To his surprise, they all agree to be his girlfriend. Now, this shoujo-manga-loving guy has ended up in a kind of harem story, quadruple-timing four girls.

Then the shinigami introduces herself as Airi, and sets a time of 3 months, during which she'll watch Kaoru (and his girlfriends) very closely in order to confirm that he can pull this off. If he fails, then his head will be hers.

Shinigami-sama to 4-nin no Kanojonote The Grim Reaper and the 4 girlfriends is a manga by Suyama Shinya, the author of Gakkou no Sensei and Akuma Jiten, with CHuN (of Maou-sama no Yuusha Toubatsuki fame) in charge of art. The manga was serialized from 2013 to 2015 in Gangan Joker, being Cut Short at 18 chapters and compiled into three volumes.