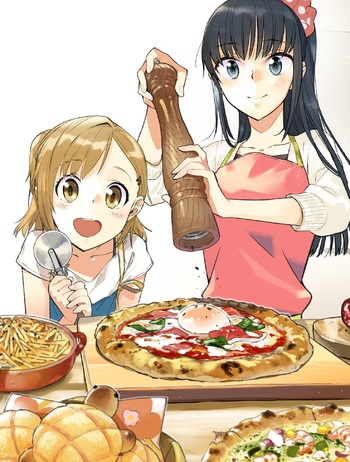 Sachi (left) and Ayari (right)
"You always had this scary expression on your face, but you look so happy when you cook."
— Sachi to Ayari
Advertisement:

Sachi's father and Ayari's mother just got married, and just like that, the two girls became sisters. While moving into a new apartment, their parents suddenly leave to go travel the world for their honeymoon, leaving the girls alone with just each other. Because of their different personalities, they aren't able to connect with each other. Not to mention, Ayari's permanent Death Glare and cold demeanor makes her seem particularly unapprochable. Everything seems hopeless and awkward, but the arrival of a leg of jamón serrano

from their parents reveal something they both have in common: Their love for food. Ayari's passion is cooking, while Sachi's is eating.

With this as a gateway, they are finally able to open up to each other. And so begins the sisters' life together, as they get closer to each other through cooking.

Shinmai Shimai no Futari Gohan is a cooking Slice of Life manga by Hiiragi Yutaka. The manga started serialization in 2015 in the magazine Dengeki Daioh. In 2019, a live-action drama adaptation by TV Tokyo was produced and aired from October to December that same year.

Tropes exclusive to the drama: