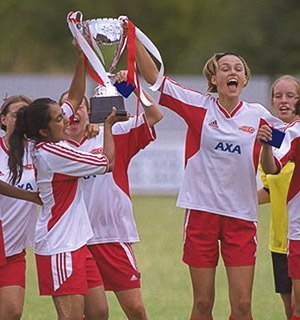 "[Rainbow Dash is], like, the captain of every sports team."
— Pinkie Pie, My Little Pony: Equestria Girls
Advertisement:

The passionate sports girl can put the Jerk Jock in his place by beating him at his own sport, and also protects the Non-Action Guy from the Jerk Jock as well. She can vary from being a sweet and shy yet diligent player, to being a dark personality who just wants to play football. The specific sport she pursues is often dependent on personality; tomboys generally prefer more aggressive sports like soccer, basketball, swimming, martial arts, baseball and softball, whereas girly girls generally prefer tennis, ice skating, gymnastics, cheerleading and volleyball.

You can tell that she is passionate because this girl lives for one sport at which she excels, or perhaps for any opportunity to show her strength, despite what anyone else thinks. In the first case, if it's a traditionally male sport, her desire to prove herself could lead to Sweet Polly Oliver as she attempts to get on an all boy team. If she plays a variety of sports then she's more likely to be the Girl Next Door. If it's a boys' team then it's You Go, Girl!.

She is also a more accessible Love Interest for the hero, since he can get to know her better by playing sports with her. There is a bit of Wish-Fulfillment here for both the guys (who want a girlfriend they can talk about sports with) and the girls (who want to associate themselves easier with sporty guys). Making sports her priority can be intimidating or relatable and/or attractive depending on the setting and the characters within it.

In works focused on female characters, she is sometimes subjected to Even the Girls Want Her since her sports heroics impresses the girls, but without being as intimidating as a boy. This is particularly common in Anime. When taken to the logical extreme this can turn her into a Lesbian Jock. She can also form a Masculine Girl, Feminine Boy pairing with a Non-Action Guy who is more artistically cultured than athletic, and in some cases, the passionate sports girl may also have some artistic talents herself as well, and she will also protect the non-sports guy from the (usually male) Jerk Jock as well.

Unlike male athletes who are usually not depicted as stellar at academics (unless it involves natural sciences or mathematics), female athletes are more likely to be an Academic Athlete who has excellent grades as well. In the case she doesn't have too great grades, she will be a Lovable Jock.

Depending on the sport she plays, she may or may not be a Statuesque Stunner and/or Amazonian Beauty if meant to be attractive. The first is common with girls that play basketball and volleyball, while the other is most common in martial artists.

Compare Gamer Chick, another example of a female in a traditionally male-dominated form of entertainment. May cross over with Action Girl, especially if her chosen sport is a combat sport, or Fitness Nut, if her passion for her sport of choice becomes an obsession. Compare Obsessive Sports Fan for those who get really into watching sports, even if they don't play.