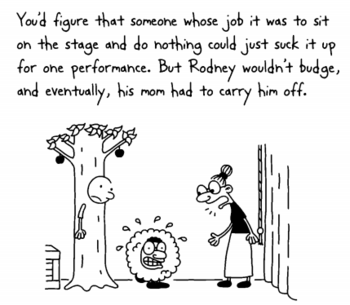 Sometimes the peaceful atmosphere of our favourite TV show will get disrupted when a film crew runs into town. It turns out they're shooting some scenes in the area. And what do you know? One of the characters gets to have a small part. Nine times out of ten, they'll get a line or two. Despite having just one line, they'll angst over it quite a bit - determined to get it right. This is almost always Played for Laughs - and half the time the line will end up cut (either due to time or the character's comical overacting). Sometimes will result in Small Name, Big Ego if the character acts like a celebrity afterwards. Another variation involves characters with small parts in school plays or community theatre productions.

Occasionally overlaps with Classically-Trained Extra. It's also Truth in Television for a lot of actors with small parts. Sometimes happens to actors with larger parts if they only have one or two lines in the scene itself. A sister trope to Performance Anxiety.