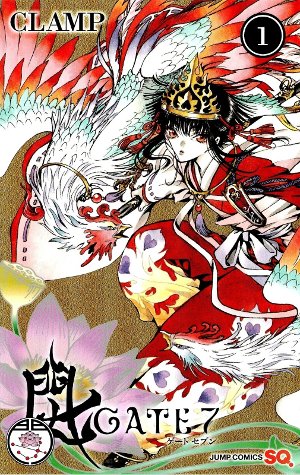 Gate 7 is the newest manga by the popular all-female manga-ka circle known as CLAMP. It was first published in 2011 in Jump SQ and went into a hiatus in 2014.
Advertisement:

When Chikahito Takamoto decides to finally take a trip to Kyoto he stumbles across three strangers. When he realizes things aren't quite what they seem, he is attacked by a faceless creature that is quickly slain by Hana. Chikahito wakes up in an apartment and is greeted and offered udon by Hana, Tachibana, and Sakura who have gone through his things, thinking him an assassin. For some reason, Chikahito is unaffected when Tachibana tries to remove his memory. Flashforward three months later and Chikahito has tranferred schools to Kyoto and is now involved with the trio. One thing is known: this wasn't the Kyoto he wanted to experience.