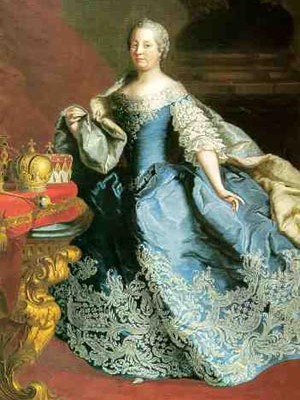 "At any moment I may be called before my Judge. I don't want to be surprised, I want to see death come."
— Empress Maria Theresa (supposedly) before her death
Advertisement:

Maria Theresa Walburga Amalia Christina (or, in German and Latin, Maria Theresia, 13 May 1717 – 29 November 1780) was one of the most remarkable rulers in European history.

When her father died in 1740 without male issue, Maria Theresa came to the Habsburg throne. She was young, amiable but over-sheltered, and her father had amazingly neglected to train her properly, though in fairness this was likely because he had to devote most, if not all, of his time fighting tooth and nail for her succession. Despite those crippling disadvantages, she learned on the job.

During her 40-year-long reign, Maria Theresa reorganised Austria's ramshackle military to defend her territory from neighboring rulers (especially her former nominal subject, Frederick II of Prussia), promoted commerce and agriculture, as well as began many social reforms which her son Joseph would expand. She is considered intolerant for despising the Jews and Protestants, whom she occasionally expulsed to remote parts of her realm. Even so, her goverment reforms are admired to this day - except for children, who usually only remember that she had the bright idea of mandatory basic schools. Speaking of children, she had 16; in an era when hygiene was non-existent, surviving 16 childbirths was little short of miraculous. One of her children was Marie Antoinette, who became even more famous than her mother, although for very unfortunate reasons.

Most people aren't aware that Maria Theresa never held the title Holy Roman Empress, because it didn't exist. She was King of Hungary and Archduchess of Austria and Queen of Bohemia, and had dozens of other titles in her own right, but for the first five years of her reign, the title of Holy Roman Emperor went to her cousin's husband, the Duke of Bavaria. When he died, her philandering husband, Francis of Habsburg-Lorraine, got it, so she was the HRE's wife. Additionally, she was the last 'actual' Habsburg. Her children would have belonged to the dynasty of Lorraine, but due to the prominence of the Habsburg dynasty, her children became von Habsburg-Lothringen.