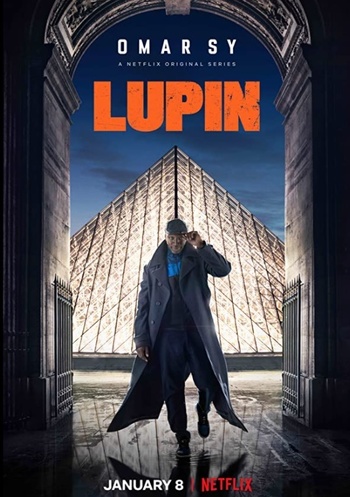 Lupin is a French mystery/caper thriller series created by George Kay and François Uzan, and directed by Louis Leterrier, Marcela Said, Ludovic Bernard and Hugo Gélin. It began streaming on Netflix on January 8, 2021. It is not related to Lupin III, though the inspiration is the same.

The series stars Omar Sy in the role of Assane Diop, a professional thief whose father Babakar, an immigrant from Senegal, died in his prison cell after being framed for the theft of an expensive diamond necklace that once belonged to Marie Antoinette by his employer, the wealthy and powerful Hubert Pellegrini.

Assane, inspired by his love for Arsène Lupin novels after Babakar gave him one for his 14th birthday, sets out to get revenge on the Pellegrini family and find proof of his father's innocence, using his charisma and mastery of thievery, subterfuge and disguise to expose Hubert's crimes, often with the help of his best friend Benjamin. However, Assane struggles to balance these activities with his familial duties to his ex-wife Claire and their young son Raoul. And now a junior police detective, who is himself a huge fan of the Lupin stories, has begun to connect the dots with regards to Assane's activities.

A second season was released on June 11, 2021, and a third, scheduled to premiere in 2022, is currently being filmed.

open/close all folders
A to H
I to Z
Advertisement: