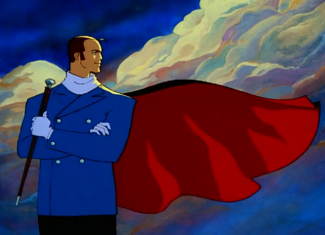 "My grandsonnote or is it my son? only wishes he was THIS classy."
Advertisement:

Night Hood (aka Les exploits d'Arsène Lupin) was a French-Canadian animated series inspired by the Arsène Lupin novels by Maurice Leblanc. Set in the 1930s, Lupin is aided by his assistant Grognard. Getting involved in his exploits are two reporters, Kelly Kincaid and Max Leblanc. Inspector Ganimard and Sgt. Folenfant seek to capture him. Lupin himself opposes the schemes of billionaire arms industrialist H.R. Karst, the devious May Hem and a tough as nails thug known only as Steel.