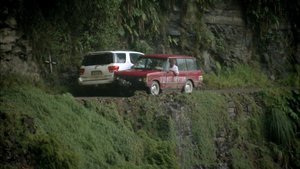 This is not the sort of place where you'd want to have an accident. note Notice the cross in the background...
Advertisement: