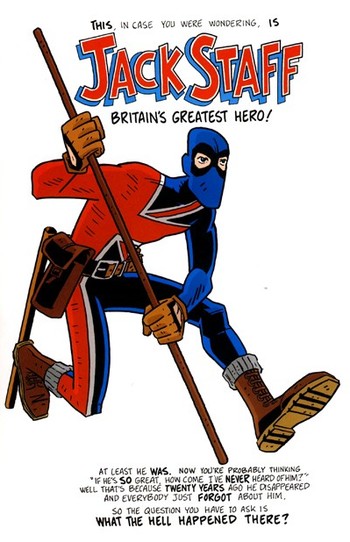 Britain's Greatest Hero is back!
Advertisement:

John Smith, salt-of-the-Earth builder and decorator of Castletown, Yorkshire, is really Jack Staff, Britain's greatest hero. Since World War II, he's been defeating threats to the people of the islands, mostly by hitting them with a stick until they give up.

Much of the popularity of the series comes, however, from the range of weirdos surrounding Jack, including BECKY BURDOCK, VAMPIRE REPORTER!, the government Weird Shit Investigator Agency known only as Q, old-fashioned copper Inspector Maveryk, and robot guardian Tom-Tom the Robot Man. To reflect this, Grist eventually renamed the book The Weird World Of Jack Staff.