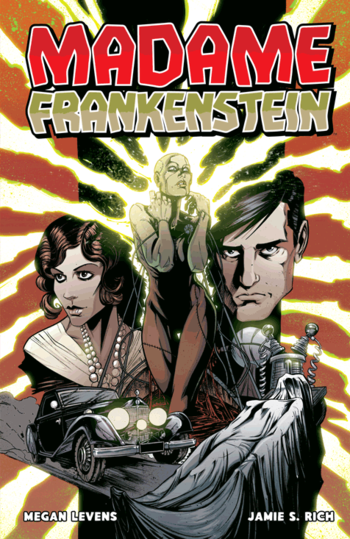 Madame Frankenstein is a 2015 comic series written by James S. Rich and illustrated by Megan Levens and Joelle Jones.

In 1932, Vincent Krall sets out to create his perfect woman by reanimating the corpse of the love of his life. He'll soon discover, however, that man was never meant to peer beyond the veil between life and death, and a woman is not as easily controlled as he believes. As his monster becomes more conscious of who she was and who she is becoming, Vincent ends up with a lot more than he bargained for.

Mixing vintage horror with mythic drama, this graphic novel by writer Jamie S. Rich (You Have Killed Me) and smashing newcomer Megan Levens is guaranteed to send chills through even the warmest of hearts. Expect murder, betrayal, and some vintage Jazz Age parties.