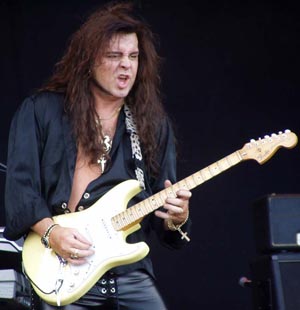 "There are three approaches to any given problem: The right way, the wrong way and the Yngwie."
Advertisement:

Yngwie Johan Malmsteen (born Lars Johan Yngve Lannerbäck, 30 June 1963) is a highly influential Swedish-American guitarist. His music is the Trope Codifier of neoclassical metal, and he is considered to be one of the best guitar shredders around, having built an impressive selection of albums across his solo Rising Force project after his earlier work with bands like Steeler and Alcatrazz.

Along with Eric Clapton, he was one of the first artists to have a signature guitar released by Fender.