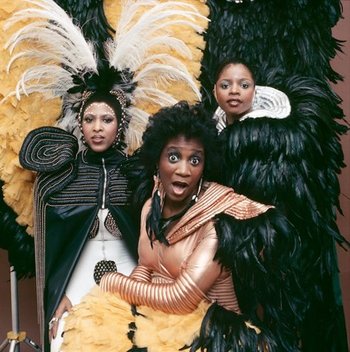 Labelle is a Philadelphia R&B group formed in 1961 notable for their number-one hit "Lady Marmalade" and their long and strange story. The members include Patti LaBelle, Nona Hendryx, and Sarah Dash. They initially formed as the Bluebelles along with Cindy Birdsong and scored a 1962 hit with "I Sold My Heart to the Junkman," though it may have been stolen from the Starlets. They had success on the Chitlin' Circuit and at the Apollo through the 60s, but they couldn't garner more hits. In 1967, Cindy left for The Supremes, and with the changing tides of R&B in the late 60s, Atlantic ended their contract in 1969.

Producer Vicki Wickham suggested a change from ballads and a clean-cut girl group image to afros, jeans, and funk rock. Patti had reservations, but they tried out the change and signed with The Who's Track Records. Their next three albums entered a world of gritty funk and progressive soul similar to Sly and the Family Stone and Isaac Hayes. Around 1973, they changed image again for silver space suits. While in their creative element, they would not see commercial success until 1974's funky "Lady Marmalade" from the Allen Toussaint-produced "Nightbirds." It went number one and made them massively famous, but they couldn't sustain their commercial success on either subsequent album. The trio disbanded soon after: each member wanted a different direction, and then Nona suffered an onstage mental breakdown.After they each went solo in 1976, Patti became R&B legend, Nona pursued funk and the avant-garde, and Sarah jumped on disco. They occasionally reunited through the 90s; in 2008, they released the album "Back to Now" and then toured together in 2009.