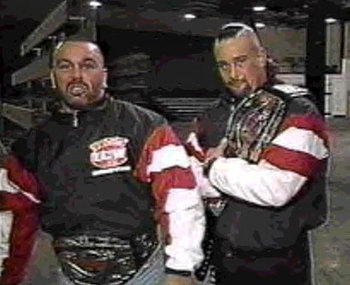 Perry Saturn (Perry Satullo born October 25, 1966) and John Kronus (George Caiazzo January 13, 1969-July 18, 2007) were an American Professional Wrestling Tag Team as The Eliminators. They formed in 1993 and debuted in Jerry Lawler's USWA. They arrived in ECW, where they really made their name. They split up in 1997 when Saturn left to follow Raven into WCW.

They have nothing to do with that ZZ Top album, the surf band The Eliminators

"These tropes have been TOTALLY ELIMINATED!":