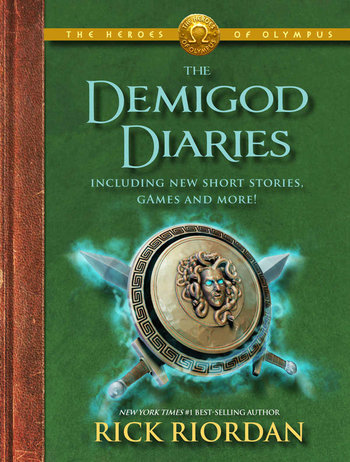 I wish you luck, young reader. Keep your armor and weapons at hand. Stay vigilant. And remember, you are not alone!
Dear Young Demigod,
Your destiny awaits. Now that you have discovered your true parentage, you must prepare yourself for a difficult future—fighting monsters, adventuring across the world, and dealing with temperamental Greek and Roman gods. I don't envy you.
Advertisement:

The Demigod Diaries is a companion book for The Heroes of Olympus, much like how The Demigod Files was for Percy Jackson and the Olympians. Within it are three Short Stories: The Diary Of Luke Castellan, Percy Jackson And The Staff Of Hermes and Leo Valdez And The Quest For Buford, all from the POVs from the short stories' Title Character. There's also a story written by Haley Riordan, the Son Of Magic. Along with these stories is a letter from the Senior Scribe of Camp Half-Blood, a interview with George and Martha (Hermes's snakes), maps of both Hal's House and Bunker 9, games and various pictures including some official pictures of some characters.

The short story The Diary Of Luke Castellan is a passage from Halcyon Green's diary; though the passage is written by Luke as the title implies. The story reveals a moment of Luke's earlier days back when he was traveling with Thalia before they got to Camp Half-Blood. The story begins with Luke and Thalia following the goat Amaltheia; one of Zeus's sacred animals, due to Thalia believing that she's a sign from her father, Zeus. This led them into discovering, entering and being trapped within Hal's mansion with several leucrota.

The short story Percy Jackson And The Staff Of Hermes begins with Percy and Annabeth relaxing together in Central Park. Annabeth reminds Percy that it's their one month anniversary with Percy failing to take her out for a special dinner, like he promised. Luckily for Percy they're interrupted by the god Hermes. Hermes's then quickly enlists their help in retrieving his staff; the caduceus, which was stolen by the giant Cacus.

The short story Leo Valdez And The Quest For Buford takes place between The Lost Hero and The Son of Neptune. In it Leo is forced to seek the help of his friends Jason and Piper in finding the table Buford when he runs away after being polished with Windex. The reason this is so important is because Buford has within his drawers the device he needs to complete the Argo II's engine. To make things more difficult though the three have only one hour to do to ring Buford and get the device he's carrying into the Argo II's engine or else it will explode destroying Bunker 9, most of the woods of Camp Half-Blood with a 35% of more being destroyed. It also doesn't help that some Maenads are in the woods looking for Dionysus.

The short story the Son Of Magic is about the demigod son of Hecate, Alabaster Torrington. It's revealed that Alabaster is one of the demigods that fought for Kronos and remained a enemy of the Olympians even after peace was made, though they ignore him due to a deal they made with Hecate. The story is about Alabaster trying to kill his half sister the monster Lamia, who's been attacking for several months and will not stay dead. The story is told by the POV of Dr. Claymore a mortal ally of Alabaster.

"What you learn from their experiences could very well save your life!"

Alternative Title(s): The Heroes Of Olympus The Demigod Diaries, The Diary Of Luke Castellan, Percy Jackson And The Staff Of Hermes, Leo Valdez And The Quest For Buford, Son Of Magic