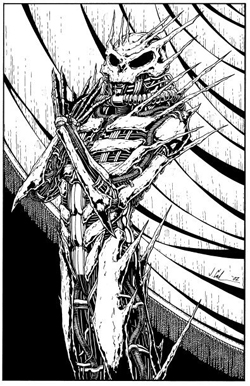 We aren't nice people.
"Inevitably, there are those who have a morbid fascination with such evils. Just as the human race has spawned "Satan-worshippers", at least one group exists which has dedicated itself to the study of Paradox, turning its back on traditional Time Lord values and instead embracing a form of dark shamanic spiritualism. Indeed, this group is not unlike one of the voodoo cults of Mutter's Spiral, with its own pantheon of spirits and demons, and its own occult rituals. The group is known as Faction Paradox, and it's hard to describe the dread this name conjures up in the minds of the Time Lord archons..."
— Alien Bodies
Advertisement:

Faction Paradox is a splinter of the Doctor Who Expanded Universe continuities, and was originated by author Lawrence Miles. First seen as particularly dreaded enemies of the Eighth Doctor, the Faction eventually grew in number and power until they acquired their own continuities to play with.

The Faction was once one of the Homeworld's ruling Houses, until illustrious leader Grandfather Paradox became disenchanted with their diseased pretensions to immortality and separated from them, turning his House into a time-travelling, time-active, ritualistic death cult. The Faction is based in the beliefs of voodoo, picking up new members from all possible species and seeding necro-fetishism and atavistic horror across time and space — rejecting both the immortality that the Houses sought and ridiculing the Laws of Time that they had laid down.

The Faction delights in creating temporal paradoxes, all the while seeking to tighten their hold over the universe and drown it into anarchic chaos, by pitting the main players in the Second War In Heaven against each other while remaining ambiguously neutral. On one side of this Time War are those pompous asses, the Great Houses of the Faction's twin sun Homeworld. The Great Houses are essentially an aristocratic race who spent their time sleeping in their laurels until a certain bearded renegade returned home, bringing news of a great danger. Opposing them are the enemy, a force so intricate and vast, it is pointless to even name. It's not a specific army, or even a person... it's something far, war worse. The battlefield is all of history. And the battle prizes are the two most valuable territories: cause and effect.

As you can imagine, the Faction stands to gain much.

Where we and our friends have been, and where our lore has been established, in case you're curious...

BBC: The Eighth Doctor Adventures as a whole, particularly the following books in the series:

Obverse Books: The City of the Saved

Additionally, short stories, prologues, epilogues and dissertations have been published in charity anthologies and across the web. Happy hunting...