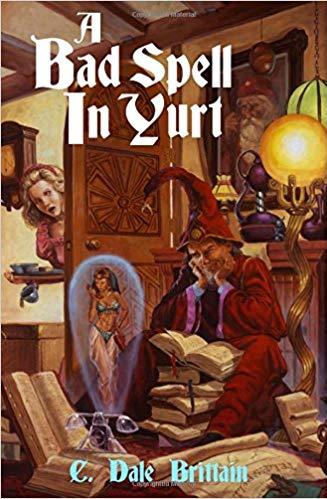 The Wizard of Yurt is a fantasy series by C. Dale Brittain, combining Medieval European Fantasy with mystery. It is currently ten books long.

The protagonist is a perfunctorily "school-trained" wizard named Daimbert who is assigned as the Royal Wizard to one of the smaller kingdoms in the loose confederation he was born into. There are three estates: royalty, the church, and wizardry. Magic, as carried out by wizards, magicians and witches, is opposed to "the supernatural" - the actions of churchmen enlisting the aid of saints or of evildoers making deals with demons from Hell. Most of the setting is heavily Christian but "the East" is a mixture of Islamic kingdoms and a Christian Byzantine analog. In the East, the two estates of wizardry and royalty are merged, as are the estates of royalty and church in the Islamic kingdoms. Within "natural" magic, there are various schools, such as light and air, fire, blood and bone, etc.

A typical story involves several mysteries at once and Daimbert as the principal investigator of most or all of them. Conflict in the series arises from the tension between church and magic, which is somewhat abridged by Daimbert's friendship with Father Joachim, originally the Royal Chaplain of Yurt, and later from tension among all the estates. Personal conflict for Daimbert includes jealousy among the students of his wizard school class, a long unrequited love for the Queen of Yurt, and his relationships being squeezed between the wizard's rules against marriage and the church's rules of celibacy unless married.

Thus far, the series consists of the following: