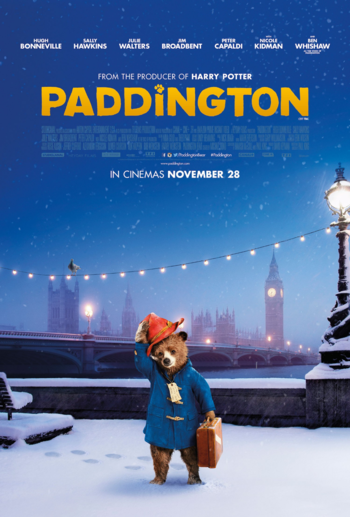 "I'll never be like other people, but that's alright, because I'm a bear. A bear called Paddington."
—Paddington
Advertisement:

Paddington is a 2014 live action film based on the much loved (especially in the UK) Paddington Bear books by Michael Bond.

Passing through Paddington Station, the Brown family encounter a young talking bear who has traveled from Darkest Peru in search of a home. They offer him a place to stay, though Mr. Brown firmly insists it's only temporary, and Hilarity Ensues. So does drama, after a taxidermist sees Paddington and plots to get her hands on him.

A sequel called Paddington 2 was released in November 2017. A third film has also been announced and is due to start filming in early 2022 after lingering in Development Hell.