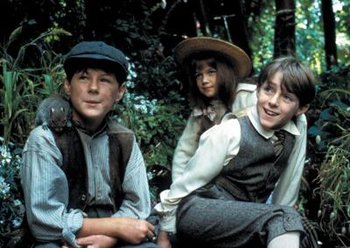 Colin: Are you making this Magic?
Mary: No. You are.
Advertisement:

The Secret Garden is a 1993 film based on the novel The Secret Garden by Frances Hodgson Burnett. It is directed by Agnieszka Holland, and stars Kate Maberly as Mary Lennox and Maggie Smith as Mrs. Medlock.

Possibly the best known of the film adaptations (except for perhaps the 1949 version), it makes a couple of changes that are often mistaken for book canon; Mary's parents dying in an earthquake rather than cholera, her aunt being related to her mother rather than father, and Medlock being more antagonistic. It was a significant hit at the time, getting Maggie Smith a BAFTA nomination and winning praise for its cinematography (done by the legendary Roger Deakins). It was also praised for tackling darker themes such as death, Parental Abandonment and depression in a child-friendly way. It is Kate Maberly's best known role.

Despite following a few years later, the original sequel Back to the Secret Garden (starring Camilla Belle) is actually a follow-up to the 1987 Hallmark miniseries rather than this film.

The Secret Garden contains examples of: