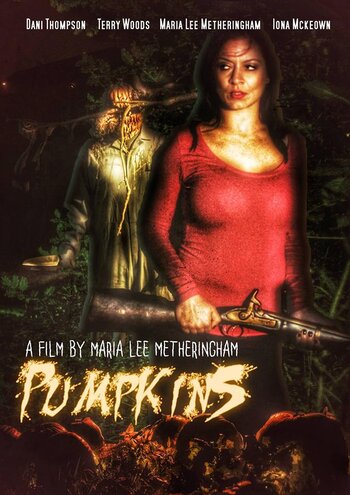 Pumpkins is a 2018 British Slasher Movie by Maria Lee Metheringham.

An old man (Terry Woods) and his niece (Maria Lee Metheringham) are a couple of people in the countryside who grow pumpkins on the land they own out there. Thing is, the teenagers don't like this, and frequently make it known via vandalism.

One day, the old man comes out to tend to his pumpkins, only to discover they've been vandalized. The shock of the discovery send him into a cardiac arrest that kills him, at which point the growth formula he was to use causes the vines from his pumpkins to envelope him and resurrect him as a pumpkin-headed ghoul (Will Metheringham) who takes his revenge on the vandals... and anyone else who meets his ire.