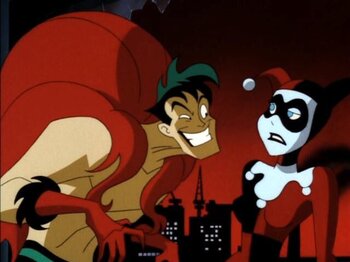 Batman: Who are you?
The Creeper: They call me... "Yellow-Skinned Wacky Man!" But I prefer The Creeper!
Robin: Call Arkham, quick.
Advertisement:

Reporter Jack Ryder presents an account of the Joker's origin story, broadcast live from the very spot where he fell into a vat of chemicals seven years earlier. However, the Clown Prince of Crime himself drops in and decides to present his own version of the events, dosing Ryder and his crew with laughing gas and then tossing Ryder into a chemical vat in a macabre re-enactment.

Batman and Robin arrive, having seen the Joker's intrusion on live TV. The resulting battle ends with the chemical plant in flames as the Joker and his henchmen flee. The heroes attempt to save Ryder, but find only his burning and dissolving coat.

However, Ryder is alive, if not precisely well. The combination of laughing gas and strange chemicals has transformed him into a powerful, nimble, yellow-skinned wacky man who will soon be known as... (dramatic pause) the Creeper! He barges into a thrift shop looking for a suitable outfit for his new persona, and then goes looking for the Joker.

Alfred calls Batman with the news of the thrift shop incident, noting that the odd intruder paid for his purchases with Ryder's credit card. This puts Batman and Robin on the Creeper's trail. They catch up to him as he interrogates the Joker's henchmen and hits on Harley Quinn. However, the Creeper's strength, speed, and unpredictability prove to be too much for the heroes, and he escapes.

The story ends in a crescendo of chaos, with the Creeper chasing the Joker and Harley and Batman and Robin chasing everybody else. Finally, Batman captures the Joker (who begs him to save him from the "lunatic" Creeper) and sedates the Creeper.

In the final scene, Batman has restored Jack Ryder to his normal self with an antidote skin patch. He tells Ryder that the incident will blow over, since nobody else knows the Creeper's identity, and cautions him to keep the patch in place until he returns with a fresh antidote supply. After Batman leaves, Ryder ponders the situation...and the sound of tearing tape is followed by the Creeper's maniacal laugh.