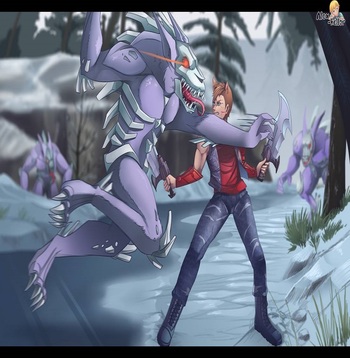 A Boy No Morenote commissioned by Alex-Kellar

A year has passed since the death of his mother. Now a budding young man, Atreus travels to Beacon Academy in the hopes of following in his mother's footsteps and protecting others. Yet unbeknownst to him, those who lived in an age of gods are quick to take notice of his true nature. They know a god has come to Remnant. A God of War.
— FanFiction.Net Summary
Advertisement:

is a Crossover between God of War (PS4) and RWBY, written by I am but two days old

After the downfall of Mount Olympus and stabbing himself with the Blade of Olympus, Kratos awoke and found himself in a strange world where the moon lays shattered and the people speak in a language he knows nothing of. At first living a solitary existence, he is brought out of his shell by one of the townsfolk of Lapis — a woman named Faye. Years later, after Faye has passed from this world, young Atreus seeks to follow in her footsteps, having been raised on the tales of heroes and hearing tales of his mother, who traveled across the Kingdoms and helping people in need.