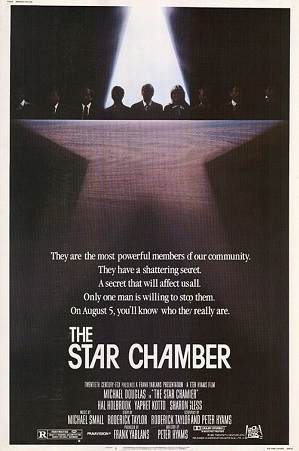 Released in 1983 and directed by Peter Hyams, this crime drama starred Michael Douglas and Hal Holbrook. Michael Douglas is Stephen Hardin, a young superior court judge in Los Angeles who's frustrated with having to set guilty criminals free on technicalities. Hal Holbrook plays the older Judge Caulfield who initiates him into a group of judges who run an illegal secret court that reviews cases then votes to convict and sentence to death criminals they deem deserving. A hitman takes care of the rest.

After they dispatch two murderers, Hardin brings his own case up, wherein two thugs who allegedly raped and killed a little boy were set free by a good faith error of the police in gathering evidence. The hitman is sent out again. At the same time, a separate investigation has turned up evidence that indicates the boy was killed by members of a child porn ring, not them. Hardin is horrified by the error, and tries to have Judge Caulfield call off the hitman. Caulfield puts forth the following reasons for not calling off the hit: in order to protect themselves, neither the court or the hitman know each others' identity; also, the intended victims are probably guilty of other crimes and their deaths are an acceptable outcome. Besides, the court has to be protected for it to serve good. Hardin says they at least can warn the men, but Caulfield sees this as an unacceptable risk for exposure. Hardin attempts to stop the men from being killed before it's too late...

The title is from the name of a court in Late Medieval-Renaissance England notorious for the brutal, unaccountable methods it employed as a tool of the King's will, the Star Chamber

, which is similar to that of the secret court in the movie-hence the name. It's also a term used for any unaccountable, inquisitorial proceeding, e.g. "star-chamber method."

The Star Chamber includes examples of the following tropes: