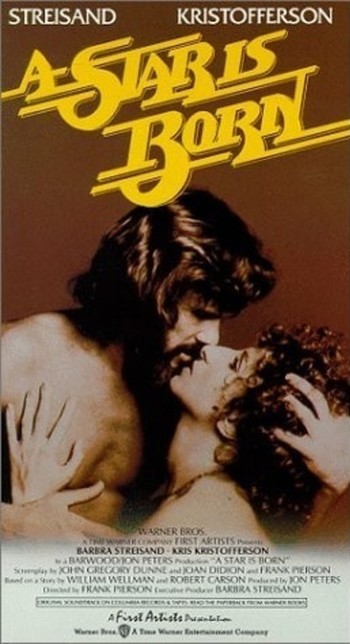 A Star Is Born is a 1976 film directed by Frank Pierson, starring Barbra Streisand and Kris Kristofferson.

John Norman Howard (Kristofferson) is a big rock star. He also has a severe case of alcoholism which has sent his career into decline. One night after showing up late and drunk for a concert and leaving early, he makes his way to a bar where he sees an aspiring young singer named Esther Hoffman (Streisand). He is impressed by her talent and more impressed when she rescues him from the bar brawl that ensues.

He escorts her home. She refuses to let him in but they agree to meet the next morning. Eventually, after Howard makes a mess of himself at another concert, they meet again and fall in love. Howard invites her onstage at one of his concerts, and Esther is a huge hit. She becomes a big star, headlining a tour, winning a Grammy. Unfortunately John's downward spiral continues, even after he and Esther get married—his band fires him, he shows up drunk at the Grammy ceremony and humiliates Esther, Esther catches him in bed with a reporter. Eventually they reconcile, but tragedy awaits.

This is the third of four versions of A Star Is Born, previous movies having been made in 1937 and 1954 and a fourth released in 2018. However, neither this, nor any other version has any relation to the 1948 film A Song Is Born.