Comic Book / We Are Robin 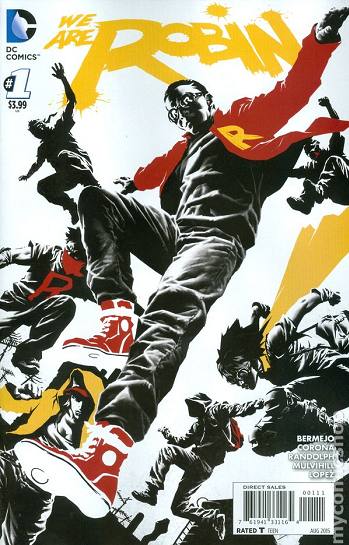 We Are Robin is a DC Comics series written by Lee Bermejo and drawn by Rob Haynes and Khary Randolph.

In the wake of the events of Batman: Endgame, Duke Thomas became separated from his parents, and now searches the city for them. During his search he stumbles across "We Are Robin," a collective of teenagers inspired by the Bat-Family, and is recruited to join them.

This sets Duke on his own path toward heroism, as well as puts him in all kinds of danger, that of which he was somewhat reluctant to participate in at first but that he embraces full force and with pride before long.

Along with Duke Thomas, the core group of Robins the story focuses on are as follows:

This work is a part of the following storylines: