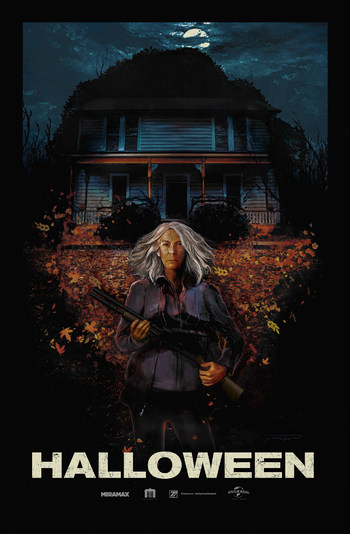 Halloween, which was produced by Miramax and Blumhouse Productions and distributed by Universal Pictures, is the eleventh film in the Halloween franchise, released just in time for the 40th anniversary of the first film.

The film had been in development since May 2016. John Carpenter, who directed and co-wrote the original film, is an executive producer and composed the musical score, making this the first film in the Halloween franchise he has been creatively involved with since 1982's Season of the Witch. David Gordon Green (Pineapple Express) signed onto the project as director as well as co-writer (alongside Danny McBride) in February 2017. It is a direct sequel to the 1978 original, which means it ignores every other film in the franchise—including Rob Zombie's remake duology.

40 years have passed since Michael Myers’ Halloween killing spree in Haddonfield, Illinois. And while Michael has been held safely in the Smith’s Grove Sanitarium ever since, Laurie Strode, still shell-shocked from the experience, has been preparing for his return for the past four decades, becoming estranged from her family in the process. But sure enough, Laurie’s fears prove to be not unfounded: when the bus carrying Michael to a new facility crashes, he starts making his way back to Haddonfield to continue what he started all those years ago…

As for the cast: original star Jamie Lee Curtis returns to the franchise as Laurie. Nick Castle, who played Michael in the original movie, also reprises his famous role (for small cameos, that is - Michael's breathing sound is him and the moment Laurie first sees Michael is him, while the rest of the film has Michael played by James Jude Courtney). As for new characters, Judy Greer plays Laurie's daughter, Karen, while Andi Matichak plays her granddaughter Allyson.

In June 2019, it was announced that David Gordon Green would return to write the script and direct the sequel, and Curtis, Greer, and Matichak would be reprising their roles. The following month, two sequels, Halloween Kills and Halloween Ends, were announced by Carpenter himself, the former of which was released October 15, 2021 while the latter is set for October 14, 2022.note The sequels were originally scheduled for release in 2020 and 2021 respectively but were delayed because of the COVID-19 Pandemic. These films will set an end to the saga of Michael Myers and Laurie Strode.

Laurie: You don't believe in the bogeyman?
Aaron: No.
Laurie: You should.