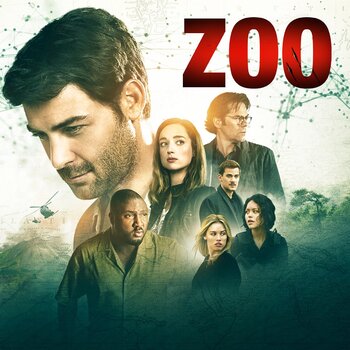 “For centuries, mankind has been the dominant species. We’ve domesticated animals, locked them up, killed them for sport. But what if all across the globe, the animals decided no more? What if they finally decided to fight back?
— Opening Narration
Advertisement:

Zoo is an American drama series aired on CBS in America, based on the novel of the same name by James Patterson (also one of the executive producers) and Michael Ledwidge. It ran for three seasons of thirteen episodes.

The series centers on reports that animals all over the world have banded together to wage attacks against humanity for no reason. Ex-field-zoologist Jackson Oz (James Wolk), whose late father was ostracized in the scientific community for anticipating a global animal uprising, finds himself caught in one while doing his job as a safari guide for tourists in Africa. When he saves the life of Chloe Tousignant (Nora Arnezeder), a French DGSE intelligence analyst who was one of the tourists caught up in an unprecedented mass lion attack, the two began to work together with fellow survivor and safari guide Abe Kenyatta in finding out who or what is making the animals hostile towards humans.

Meanwhile in Los Angeles, reporter-on-crusade Jamie Campbell (Kristen Connolly) joins forces with antisocial veterinary pathologist Mitch Morgan (Billy Burke) to investigate why previously-peaceful zoo lions broke free and went on a killing spree. Although Jamie's attempts to link the killings to agricorp giant Reiden Global hit a political brick wall, Chloe's superiors at DGSE learn of the pair's interest, and recruit them to team up with Chloe, Jackson and Abe, to look into the cause for attacks that are now occurring worldwide.

And yes, the man who wrote the opening title music is that John Carpenter.

The show ran for three seasons airing between 2015 and 2017, but was canceled after the conclusion of the third season, apparently leaving the series to end on a cliffhanger.