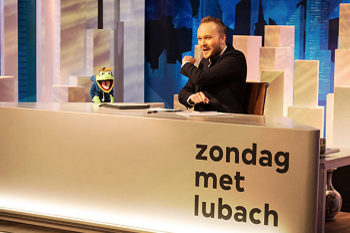 Zondag Met Lubach (Sunday with Lubach) is a Dutch satirical late-night show hosted by Arjen Lubach, which as the title suggests, airs on Sunday evenings. It tackles news topics from the previous week originating in the Netherlands, although foreign events come up as well.

In a style reminiscent of Last Week Tonight with John Oliver, Lubach will show his research on the subject, make funny remarks, and give his (usually progressive) thoughts. First airing in november 2014, the show has been gaining popularity, breaking the one million viewer landmark for the first time in Season 6 episode 2. The catalyst was the previous episode which contained a segment which introduced the Netherlands to the then recently inaugurated Donald Trump, this segment went viral after it was uploaded to YouTube.

An infamous moment in the series was when Arjen Lubach asked his viewers to support his "burgerinitiatief"(citizen initiative). Here he petitioned the government to appoint him the title of Pharaoh of the Netherlands. The very next episode reported that over 82,000 people signed the initiative, well over the required 40,000, necessitating a response from the Tweede Kamernote Comparable to the UK's House of Commons or the US's House of Representatives. Obviously, it didn't land him the title, since the position doesn't even exist.