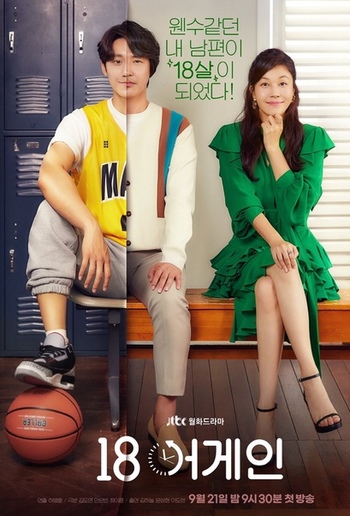 What is your dream now that you are young again?
Advertisement:

Hong Daeyoung and Jung Dajung haven't had it easy. An unplanned pregnancy forces the former high school basketball star and his girlfriend to become parents at age 18 years old without receiving support from their respective parents. Eventually, their marriage deteriorates to the point that Dajung demands a divorce which he reluctantly agrees on. Daeyoung's life keeps taking a turn for the worse as his relationship with his wife and kids fall apart and he loses his job. Exhausted, Daeyoung returns to his old high school basketball court. Wishing to go back in time and fix everything, he throws a shot hoping that if he can make it the wish will work; the lights go out just before the ball reaches the net. When they come back on, Daeyoung guesses that it didn't go in and goes to a local convenience store... only to realize then that he has somehow returned back to his 18-year-old self.

After a hilarious fiasco with his Eccentric Millionaire best friend, Daeyoung decides to give life a second chance. Posing as Deokjin's son, Daeyoung enters his kid's high school as their New Transfer Student classmate; Go Wooyoung. In the process, he gets both his second chance and realizing how much he's screwed up with his family. Will Daeyoung, who is now living with his new identity as Wooyoung, manage to fix his life, save his marriage with Dajung and repair his broken relationship with his kids?

Tropes appearing in 18 Again include: