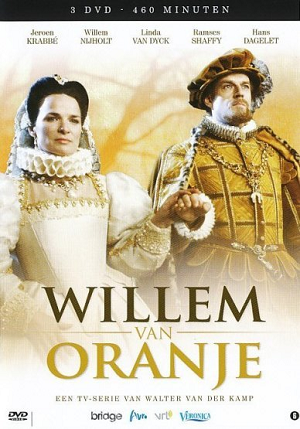 William of Orange is a Dutch-Belgian series that was first broadcast in 1984.

It follows William of Orange as he first enters the court of Charles V and becomes one of his favourites. Ever pleasant and not showing strong opinions, he gets the nickname ‘William the Silent’. A popular noble man in the Low Countries, he nevertheless begins to question the harsh treatment of Protestants. After the ascension of the uncompromising Philip II, unrest increases.

William and many other nobles begin to question and resist orders given by Philip. When Catholic Churches in several towns throughout the Low Countries are destroyed by Protestants, William flees, rightly guessing he would be held responsible.

After two of his fellow nobles are decapitated, he invades the Netherlands from his German lands and starts the Eighty Years War between the Netherlands and Spain.He is finally murdered by a fanatic, who was incited by Philip.

Many famous Dutch and Belgian actors participated in the series, which was one of the most expensive ever made in Belgium or the Netherlands.

William of Orange provides examples of: