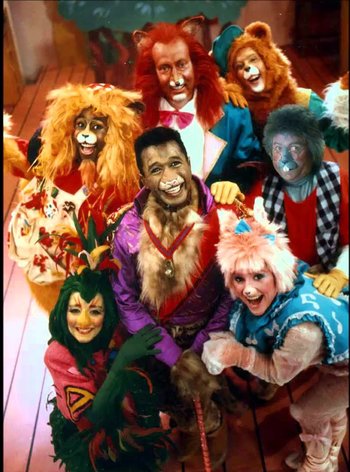 "Zoobilee Zoo, Zoobilee Zoo
Magic and wonder are waiting for you
So come on with us now
We can discover the wonder of you
Welcome to Zoobilee Zoo!"
Advertisement:

Zoobilee Zoo is a 1986 live-action show for children produced by DIC Entertainment as one of their few live-action productions. It was set in a land called Zoobilee Zoo, and followed the adventures of the inhabitants of said... Zoo? The show is based on characters created by Hallmark Cards (of Rainbow Brite and Shirt Tales fame), who also co-produced and co-funded, along with WQED in Pittsburgh, a PBS affiliate.

The cast consisted of anthropomorphic animals ("Zoobles") played by actors in elaborate make-up and costumes. The main cast included: