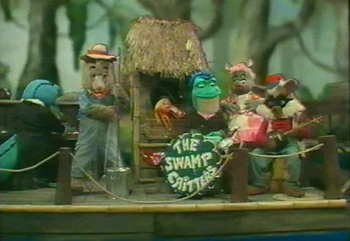 The Swamp Critters of Lost Lagoon is a live-action series with both costumed characters and puppets created by well-known country singer, Bobby Goldsboro

This show currently airs on TBN's Smile of a Child once weekly, and on Tri-State Christian Teleivision's TCT Kids channel six days a week.

This page is under construction; please go to its discussion page here

This series can be watched internationally on TBN's streaming site here

The Tropes of Swamp Lagoon: